The Series LLC: 10 Reasons To Just Say No 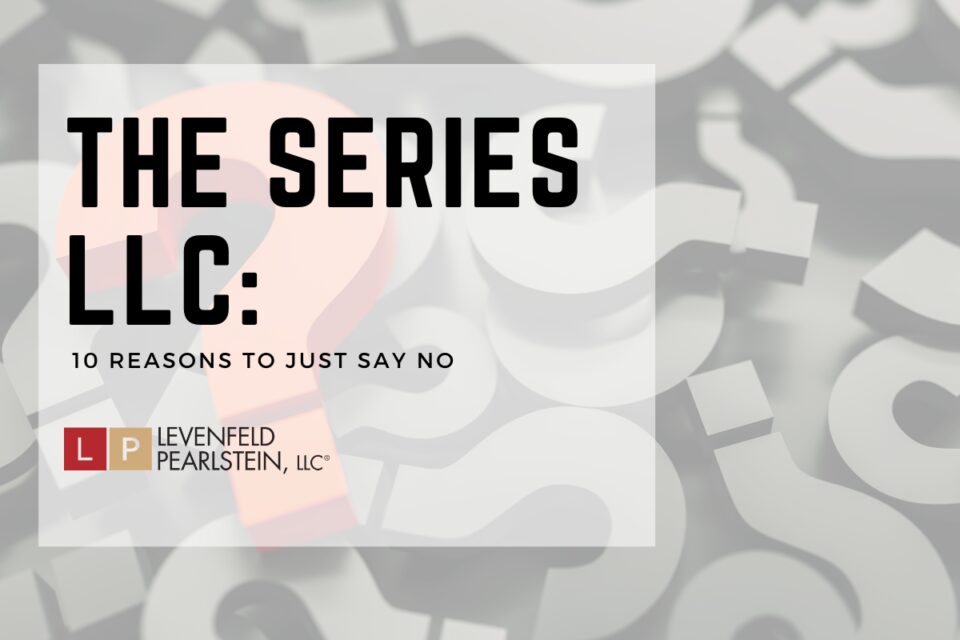 Most practitioners have now heard of “series” limited liability companies. Series companies (and series partnerships) have been around for quite some time now in Delaware and are becoming more familiar as series organization laws have been adopted in other states, including Illinois.

Having been an “early adopter” of the series LLC, we wanted to share some insights into where it is appropriate and (more to the point) inappropriate to use series organizations.

Our view is that the series company is a potentially complicated solution in search of a need that rarely exists.

10 Reasons Not to Use Series

Despite the apparent attractiveness of series organizations, on balance, there are usually more reasons to avoid them rather than to use them. Here are just a few:

1. Financing may be made more difficult due to lender unfamiliarity with series structures.

2. Licenses and permits issued by governmental authorities may be more difficult to obtain due to bureaucratic unfamiliarity with series structures.

4. Heightened risk of consolidation in a bankruptcy setting due to absence of case law.

5. Possible lack of limited liability when doing business in jurisdictions that do not have series laws.

6. General unfamiliarity by transactional counterparties can result in increased transaction costs (e.g., when a series is selling real estate, having to negotiate demands for guarantees by other series, dealing with gaps in title, etc.).

7. Employment and tort claims are more likely to “infect” affiliated series than separately organized affiliates due to a lack of case law and possible jury bias that a series may be just a dodge.

10. The client who is motivated to use series mainly to save annual filing fees is often the client most likely to shortcut formalities, resulting in increased vulnerability to “piercing of the corporate veil” or confusion in identifying the correct parties.

For these and other reasons, and despite having been an early user of series organizations, we tend to reject them more than we use them.

In the middle market, we tend to use series organizations when we wish to achieve either greater commercial flexibility in the migration of assets to different series or when we are trying to simplify the implementation of complex tax planning structures.

We also like to use a series within the context of family limited liability companies, as estate planning can be done on a series-by-series basis. For example, if a family limited liability company has exchange-traded equities, bonds, and real estate within one family LLC platform, we may want to do gifting with the equities and real estate (which have more potential for appreciation) and not with the bonds (which may not be as likely to appreciate meaningfully). That targeted gifting effort is aided by a family LLC in series form.

Series organizations have also been used in segments of the financial services industry (e.g., where there is a separate series for each investment theme in a multi-themed hedge fund) and by insurance companies (as a way of isolating risks).

Although the proposed regulations do not answer all questions, they provide a sensible framework for analyzing whether the series organization or a particular series (sometimes known as a “cell”) is a separate tax partnership or a disregarded entity.

This just begins to scratch the surface of all the different ways to think about series organizations and the confusion that can be created.

Too Much of a Good Thing

One of the more common reasons given for using the series organization is that it saves costs of forming separate LLCs. That is partly true, although in Illinois filing fees for an LLC that is authorized to create series is somewhat higher than the filing fees for an ordinary LLC, and each series that is formed involves a separate filing fee. Except in rather unusual situations where you may be creating dozens of series, the aggregate savings by using the series organization should not be material, and one must be realistic in assessing whether the apparent savings and filing fees are outweighed by the additional time and costs of setting up a proper series operating agreement, dealing with the attendant tax issues and the various commercial challenges that those series will face in the marketplace.