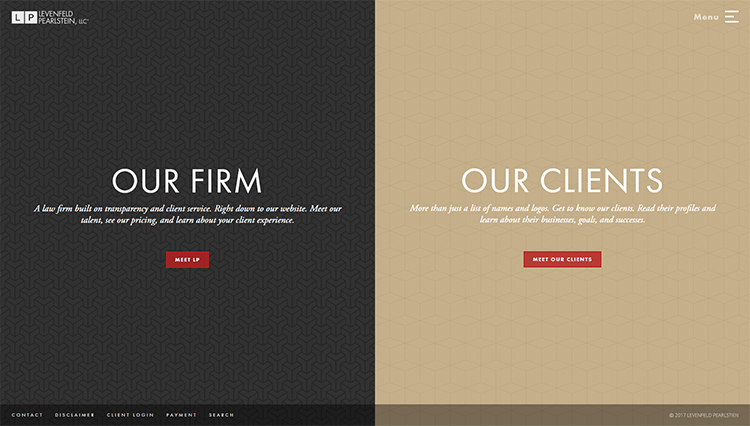 For most law firms, information about fees, billing rates, and details about lateral partner hiring and integration are closely guarded secrets akin to the nuclear launch codes or Game of Thrones spoilers.

When Chicago-based law firm Levenfeld Pearlstein decided to redesign its website, however, it decided to go the opposite route.

“We want people to make informed decisions about working with us,” says Andrea Maciejewski, director of client development at Levenfeld Pearlstein. “It’s no secret we’re in a digital age right now, and the people looking at our website want to learn as much as they can about us. So why not share all of that information up front?”

The firm also has a breakdown of the types and average value of matters it handles by practice area. When it comes to intellectual property, for instance, the firm revealed that the typical IP portfolio for a client ranged between 50 to 400 foreign and domestic filings, and that nearly one-third of its patent work was done through alternative fee arrangements. On corporate and securities transactions, the firm stated that a slight majority of its matters in 2016 and 2017 were on the buyer side and that the value of the deals ranged from $1.25 million on the low end to $111.9 million on the high end.

According to Maciejewski, each practice area came up with the figures and information it wanted to share based on what the lawyers in each group felt were frequently asked questions from clients and potential clients. “We led with what our audience wanted to know,” says Maciejewski, emphasizing that the website remains a work in progress. “We let our practice groups choose the stats they want to share as a starting point. I imagine that as time goes on, they’ll share even more.”

The firm also has an entire section filled with videos designed to help a potential lateral partner navigate the process. One video explains the firm’s policies concerning compensation and origination credit while another describes the firm culture. “We’ve incorporated transparency into our culture for years,” says Maciejewski. “This website seemed like a natural extension of that transparency.”

Kent Zimmermann, a legal consultant with Zeughauser Group, tells the ABA Journal that he liked the website. “I think it presents them as more candid and open about how they do business and what their real strengths are and how they get paid,” says Zimmermann. “I imagine that’s refreshing to a lot of their clients. It certainly differentiates them from other firms.”

Meanwhile, Sam Glover founder and editor-in-chief of Lawyerist.com, said in an email that he thinks “every firm should be collecting this kind of data and sharing it appropriately. It says you care about getting to know your clients, you understand their problems, and you are committed to helping them solve their problems,” Glover said.

Maciejewski, meanwhile, says the firm has received some calls asking about the website, but notes that many of the callers are from accounting and wealth management firms. “I imagine other law firms will take notice,” she says. “I don’t know how long it’ll take. For some firms, it’s not in their character to be transparent. You can only do something like this when all of your systems are aligned for transparency.”

Zimmermann agrees that the approach could catch on with other firms. “I think what will happen in many firms is that when partners consider a new website, some will look at [what Levenfeld Pearlstein] has done and want do something like that, but others won’t,” Zimmermann says. “But it will inspire some conversations.”